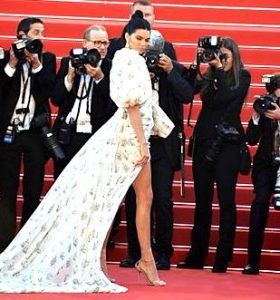 New color trend or something more? Kendall recently appeared braless on the red carpet at the 71st Cannes Film Festival in France wearing a  stunning sheer Shiaparelli white gown. While unlike the modest white jumpsuit she wore to this year’s Met Gala in New York, it wasn’t the style but the color that remained consistent. The theme for the Met Gala was “Heavenly Bodies: Fashion and the Catholic Imagination,” but the jumpsuit only subtly reflected the theme. It was beautiful but a stark contrast to the La Perla gown she wore to last year’s Met Gala. Which can only make one wonder. Is the new color trend trying to send a signal or mere coincidence? No doubt, the timing is interesting. After her younger sister Kylie recently gave birth to a baby in February 2018. And her other sister Khloe gave birth in April 2018.  Plus Kim, Courtney and Rob already have kids. Could it be the pressure is on? Or is she just having fun showing off her incredible physique? Guess we’ll just have to wait and see….

New Yorkers celebrated the best and brightest in film