Pho, as it turns out, is considered Vietnam’s national dish. The origins of pho are not well-known but it’s a recent invention, starting in the early 1900’s. It’s actually a hybrid of soup meets dish – a delicious combination of clear broth (usually beef or chicken), thin cut meat slices, and several garnishes (a variety of herbs (typically thai basil) , vegetables, spicy pastes and a wedge of lemon of lime. During the pandemic, it became my “go-to” dish and remains so. And even though it’s a soup, it’s one of those dishes that has no season – it’s great any time of year.

For more on Vietnam’s national dish, pho has already been well-covered by multiple excellent articles on the topic, available online. One of my favorites is by Eater and the other “Everything You Need To Know About Pho” by worldoffoodanddrink.worldtravelguide.net. 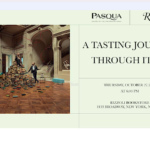 NYC celebrated its first ever fermentation festival on